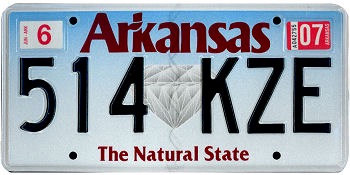 For those who love irony, “the natural state” (nude) is illegal in “The Natural State” (Arkansas). AR 5-68-204 is the most severe anti-nudism law in the country!

Across the country and around the world, naturists are often plagued by laws that impede our ability to enjoy nudism free from harassment or risk of prosecution. In many cases, the culprit is a “public indecent exposure” law that is so poorly and loosely worded that simple, non-sexual, non-offensive nudity gets outlawed in the process. And yes, we have one of those, but Arkansas also has a law that specifically targets nudism on private property. And that’s not even the worst part. I kid you not, AR 5-68-204 is so extreme that it is a crime to “advocate” nudism. You can be fined $2500 and spend a year in jail just for expressing a favorable opinion about nudism. If you are thinking “But that violates free speech!”, you are absolutely correct.

There have been several people who suggest that someone just needs to break the law, get arrested, and challenge the law in court. Well for starters, that requires a great deal of time and money. When I ask if they are willing to be the test case or foot the bill, they suddenly fall silent. (Not so easy after all, eh?) Besides, why should we, as legitimate tax-paying citizens, have to jeopardize our livelihoods to get a law changed. As a civilized society, should we not be able to fix problems without having to destroy someone’s life in the process? The other issue is that it is virtually impossible to challenge the law in court. Here’s why. When someone goes nude in public, they are charged with indecent exposure, which means the anti-nudism law doesn’t come into play. And if someone goes nude in their own house or backyard, then it’s unlikely anyone will know about it. Even if the police did find out, they probably would not make an arrest because they are ignorant of the law. (See the article at http://www.arktimes.com/arkansas/group-wants-arkansass-prude-nude-law-revoked/Content?oid=4345924. It states the Pulaski County Chief Deputy Prosecutor “was unaware of the law”. Funny, isn’t it?… They say ignorance of the law is no excuse for breaking it, but apparently ignorance of the law is an excuse for not enforcing it. But I digress.)

So given that enforcement is unlikely, you may be thinking (and others have already asked) “What’s the big deal if no one gets arrested?” The big deal is that there are ZERO naturist resorts, B&Bs, campgrounds, etc in Arkansas, and this law is the reason why. If a naturist attempted to get a business license to operate a naturist venue, he or she would incriminate themselves just by filling out the application. The big deal is that, whether naturists are “caught” or not, they are still criminals according to the law. (Just as a car thief is still a criminal, even if he gets away.) And just because one prosecutor thinks the law is “crazy, stupid and vague” doesn’t mean others feel the same way. We live in a society where violence is commonplace on TV and in real life, but if a female nipple is exposed, God help us, the world is about to end! So every time Arkansas naturists commit the “crime” of nudism, they do so wondering if they’re going to get away with it “this time”. All it would take to get caught is for a nosey neighbor to call the police because they (or their kid) saw something through a gap in the fence or blinds. If the officer that shows up actually knows his job and considers nudity to be “obscene”, then off to jail you go.

Arkansas law 5-68-204 violates the First Amendment for the following reasons:

Because the law applies to private property, Arkansas law 5-68-204 also violates the Fourth Amendment “right of the people to be secure in their persons, HOUSES, papers, and effects, against unreasonable searches”. Even if a citizen uses reasonable measures (privacy fencing, curtains & blinds, etc) to ensure others are not offended, they are still breaking the law.

Finally, Arkansas law 5-68-204 violates the Fourteenth Amendment because nudists do not receive “equal protection of the laws”. To the contrary, 5-68-204 specifically targets the Constitutional rights of nudists and naturists as described above.

So why should naturists outside The Natural State care about this? AR 5-68-204 may be unique in that it violates free speech, but it shares common ground with other laws that infringe upon our Constitutional right to gather peacefully. If we can get one anti-nudism law declared unconstitutional and repealed, it will set a valuable precedent for getting other anti-nudity laws either repealed or revised in such a manner as to stop criminalizing nudism/naturism. So even if you do not live in Arkansas, write to your elected representatives and let them know the First Amendment rights of fellow Americans are being violated, then send a courtesy copy to Arkansas elected representatives. You can find their contact information at www.UnconstitutionalArkansas.org